From the abbey to the street art of Matthias Schoenaerts: Charleroi pimps your "Ardennes weekend"

Ok let's be honest here. A few months ago, when I played with the idea of ​​being a tourist in my own country and getting to know Wallonia better, I ended up in Charleroi because of my love for street art but had no I idea what to except. At that time, I could only link the city to the fact that they had a semi-good soccer team (soccer analysts could possibly dispute this on other channels) and I vaguely remembered something about coal and steel from history lesson. That it would turn into a weekend with an abbey, a distillery, medieval streets, a modern, local cuisine and the graffiti arts of Matthias Schoenaerts, was not even in my wildest blogger dreams!

That a visit to an old coal mine made me feel even more Belgian, and almost got me into the mood for a political debate, is almost unheard of. But... I was there initially for my travel blog, so with the hashtag #WalloniaTogether I went out to put the deed to the word in Charleroi and the nearby village Thuin. Or to the # in this case... (for Dutch click here)

Okay, let's first explain something theoretical here. Because what do I mean by 'Ardennes' weekend? It is not because it is located in Wallonia that it automatically fits into that category, but as ignorant Flemings we sometimes call everything that is outside of Flandres 'Ardennes', even if it is out of sheer laziness. You would have to live in Belgium to understand this, fyi ;-)

Charleroi is located on the edge of the Ardennes in the province of Hainaut and Thuin is a town located south of this industrial city. So officially we are in the Ardennes. Check!

Hanging gardens and bells that ring

You can immidiately feel that Ardennes atmosphere in and around Thuin. A municipality with a population of 15000, where a relaxed vibe lingers on a Saturday afternoon and where the locals enjoy a tasty cheese and shrimp croquette with a fresh pint of beer. The beautifully restored belfry towers above the village as an ideal landmark and is actually also the perfect starting point for a walk. You can first visit the belfry. An entertaining venture that takes you via steep stairs to the top of the clock tower with a nice view of the surroundings. Ding Dong! Oh yes, the bells might ring while your are still inside! ;-)

At the tourist office of Thuin you can pick up a leaflet describing two walks that can be perfectly combined in one afternoon. One walk will bring you to an artistic trail presenting the medieval city and its Hanging Gardens, the other route shows you the Sambre and Thuin's boat making history.

The gardens are part of the fortifications of the medieval city. The south facing terraces enjoy a microclimate and have a specific flora and fauna. Composed of narrow paved streets and towers, this amazing site is definitely a living piece of heritage in Wallonia! 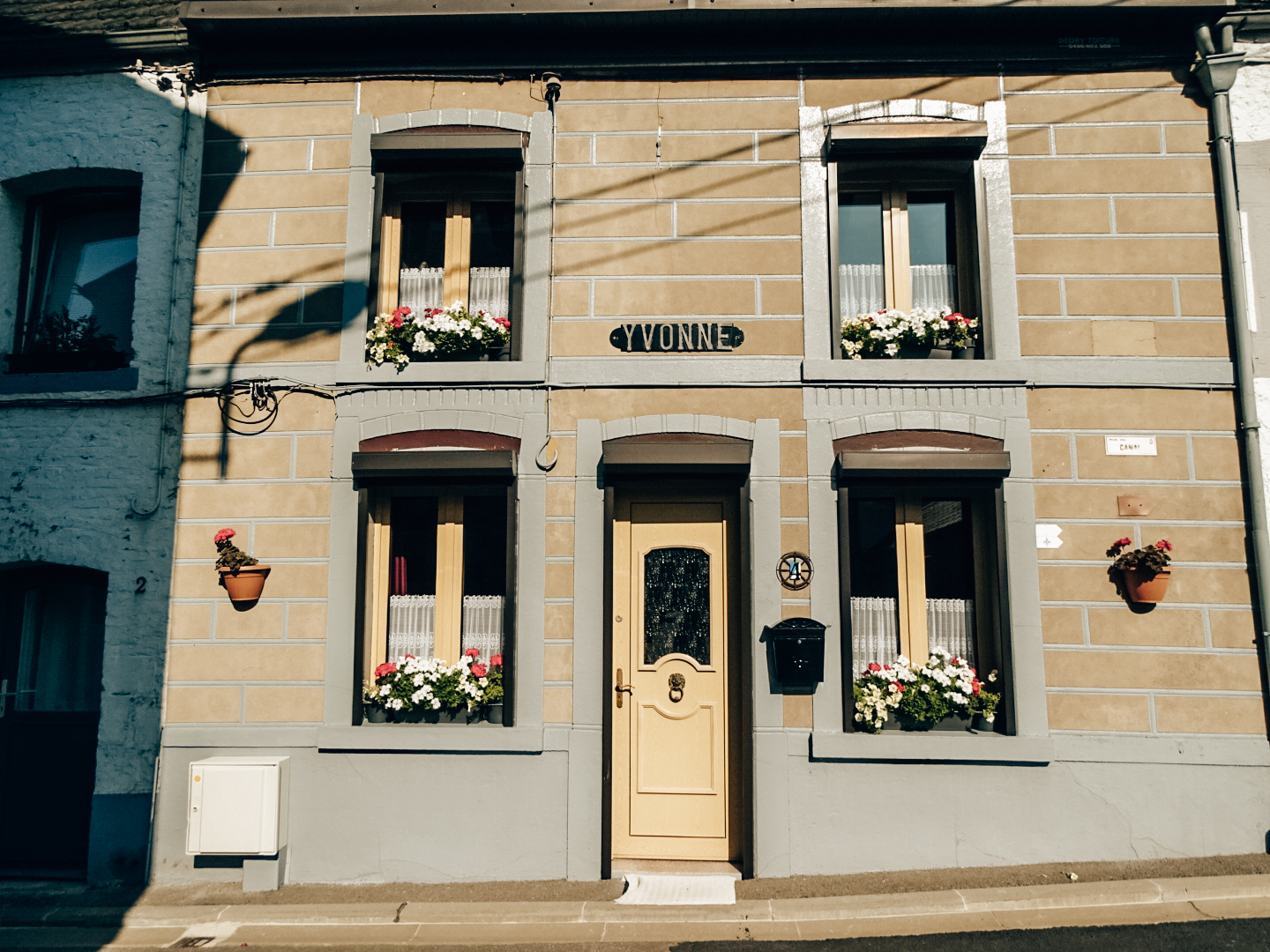 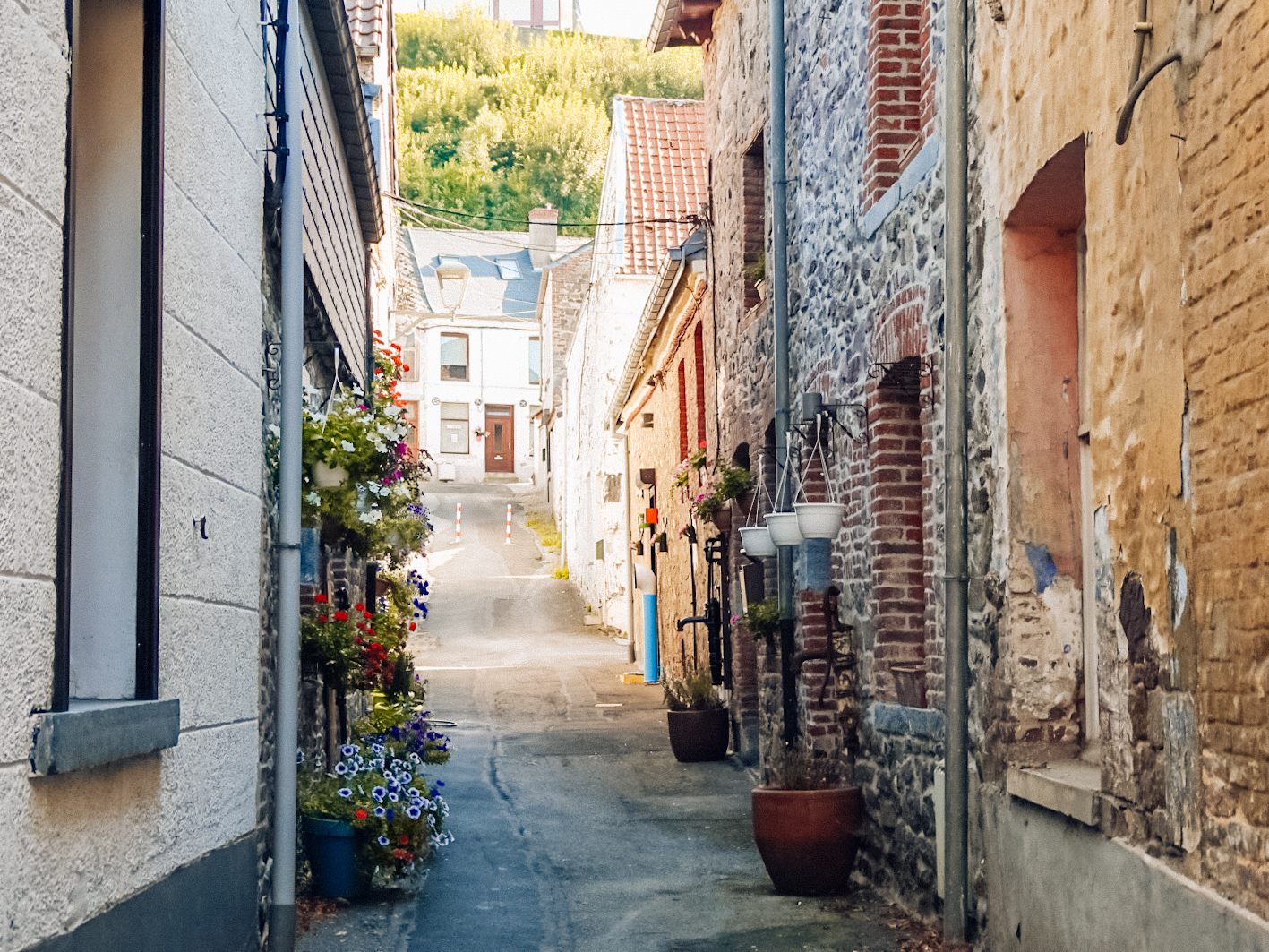 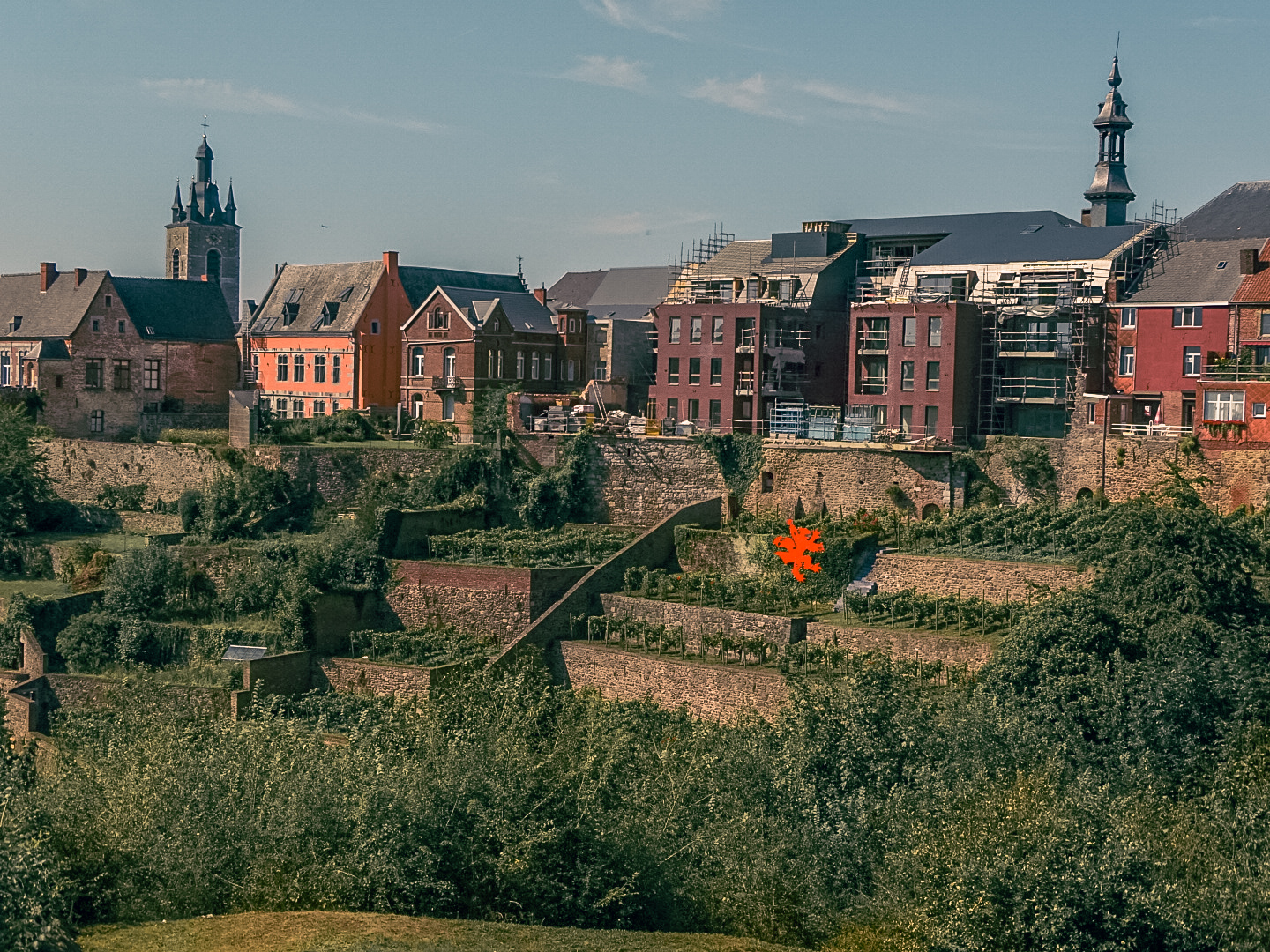 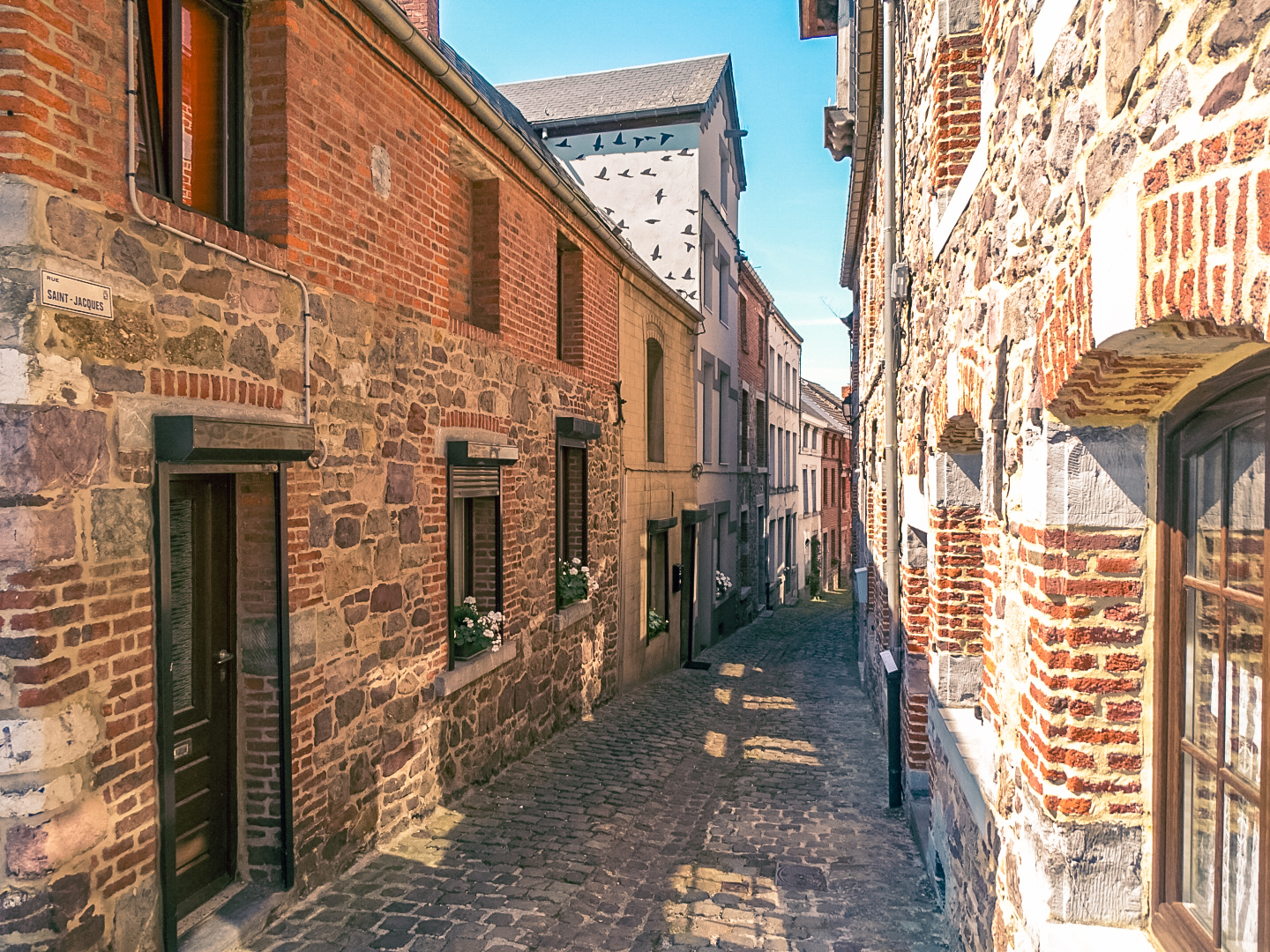 Yes, historical heritage, the Walloons are damn good at it. Wherever you end up in the Ardennes, you are always just a stone's throw away from an abbey, a fortress or a castle. Sometimes they give you the feeling of being a monk or knight yourself, especially after a few tasty abbey beers.

Strolling through a photogenic abbey

I had initially set my sight on The Abbey of Villers, known for its very photogenic gothic windows, but it was too far away from the region. So I finally opted for the lesser-known Abbey of Aulne. Still unknown but certainly not unloved.

According to the legend, the abbey was founded in 637 by Sint Landelin, a repentant robber, who named her "Abbaye d'Aulne" after the alder tree (aulne in French), trees growing abundantly in the region . It was a Benedictine abbey when it was founded, but became a Cistercian abbey in the 12th century.

I had not taken any measures to be there at 5 am or to be there before opening hours, because as a travel blogger I do not always find that necessary or realistic, especially after a hard week at work. But on a Saturday morning, in the middle of high season (end of August), the number of visitors was not too bad. I was all alone at certain parts of the site.

It is wonderful to be in the midst of these remains. The atmosphere is indeed very soothing and calls for a pleasant walk, that is how the tourist office of Wallonia describes this heritage gem. It couldn't be closer to the truth. Also nice to know for beer lovers: since 1950 the brewing activities have been resumed here and five beers are still made according to the traditions of the Cistercian monks. You can try them at the nearby Brasserie and at various other locations in the region.

The only fruit distillery in Belgium

Since I am not an avid beer drinker - don't judge - but can't say no to the combination of alcohol and fruit, I was looking forward to the visit to the only fruit distillery in Belgium, namely the Distillerie de Biercée. You might have already heard about the Poire Williams n ° 1 or the famous Eau de Villée, the showpieces in their range of drinks.

This distillery was founded in 1946 with the idea of ​​making brandy using the many orchards rich in the region, especially those with cherries and apples. In addition to the aforementioned famous drinks, they also produce around twenty other eau-de-vie and liqueurs, and even have their own gin and whiskey.

During the guided tour, visitors can discover the distillery at work: sorting and cutting the fruit and the entire manufacturing process, right up to bottling. Fermentation, soaking, ripening, mixing, it is all covered. I closed my round of questions by checking out their logo (a sort of joker) and this was their reply: We are in a folkloric region. If you drink too much, you will not only get drunk, but also a bit crazy. After this comic note, we proceeded to the tasting part with some caution. Cheers!

Respect for the past, craving for the future

One moment you are strolling like a medieval damsel through the gardens of an abbey, the next you almost think you are an Urbex* location hunter. And all this within a radius of 15 kilometers. The region around Thuin was folkloric. City life in Charleroi, in contrast was very eclectic.

Charleroi is a city in transition. They point this out in many brochures and on websites and it was immediately clear on arrival. We stayed in a hyper modern hotel, close to an equally modern shopping mall and we had dinner in a hip gastro-bistro. But on the way to these prime examples of a clean and pleasant city, we did come across the occasional drunkard or beggar. Not entirely uncommon for a big city, but they were perhaps a bit more numerous, their situation seemed more dire. An urban street art walk along the Sambre the following morning would bring some sort of clarification.

* Urban exploring, in short urbex, is visiting, photographing and documenting mostly abandoned buildings or locations that are not publicly accessible.

Via a trail walk that you can request at the Tourist Office of Charleroi you get to see a mix of street art and the industrial face of the city. You actually start with a metro ride that will take you from Charleroi to Marchienne-au-Pont and then you return via a towpath.

In the mid-19th century, numerous Flemish people left their hometown and the harsh living conditions there to settle in Charleroi. The city was a very prosperous industrial center at that time. Over the years, however, the steel industry has collapsed, as portrayed by the rusted cranes and abandoned sites that you encounter in the midst of the beautiful graffiti on the towpath. A fantastic visual statement of a city in transition. At that moment you can perfectly imagine how quickly a city can go from rich to poor. The colorful tags and innovative art work give hope, are a look into the future. Matthias Schoenaerts also showed his best spraying skills here during the Urban Dreamfestival 2 in 2003. 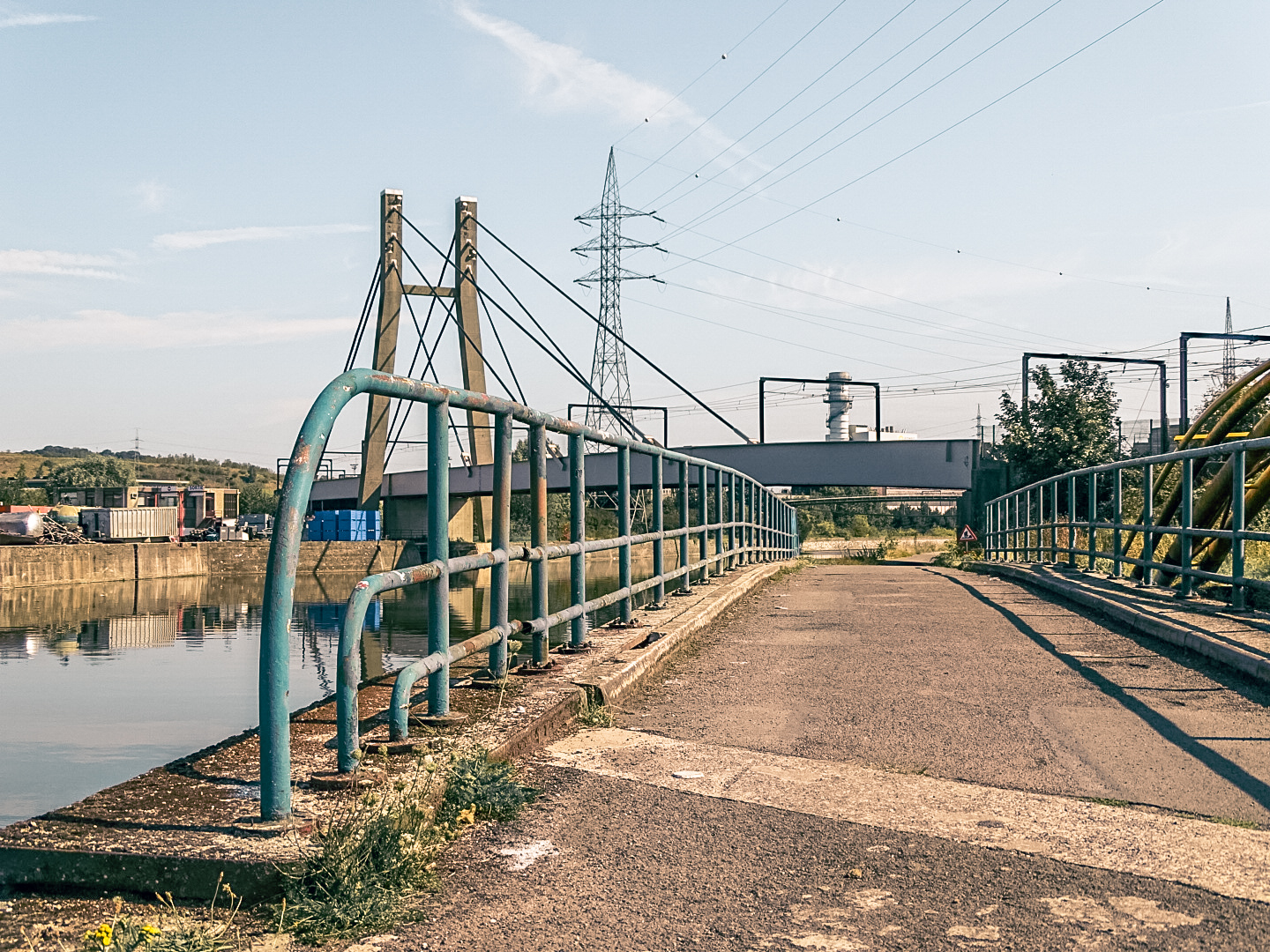 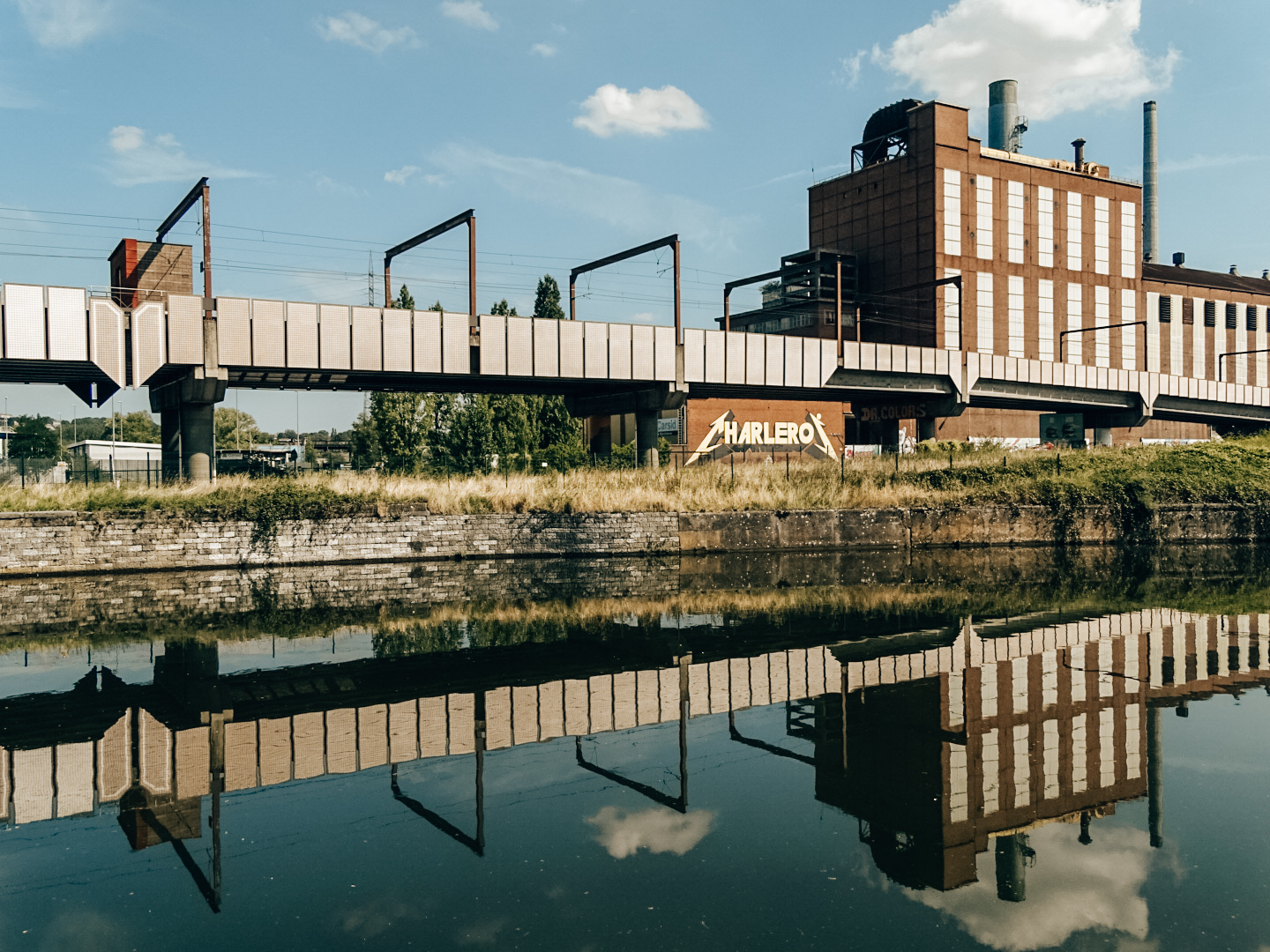 A coal mine as a symbol for the past, present and future

The fact that Wallonia and, more specifically Charleroi, used to be an important link for the Belgian economy, in the middle of the last century, became immediately clear during a visit to the Bois du Cazier.

The mine site of the Bois du Cazier was hit on 8 August 1956 by a terrible disaster which cost the life of 262 miners of 12 different nationalities. With this heritage site they want to keep the memory of that disaster alive but also look back on the industrial revolution of yore. Thanks to the melting pot of coal, iron and glass, the Charleroi region was a prosperous city. Flemings even found their way to the area to work there.

The Museum of Industry shows the region as an economic power house, bringing back to life the technical, social and economic history of this area. You can't go into the mines, but you can get close to the entrance where the accident once happened. A separate area is dedicated to the disaster. Themes such as safety at work and migration are also covered. Films, photos, testimonials, texts and other memorabilia tell you the story of the tragedy. You can still see the stairs where they had to carry up the deceased. It really touches your soul...

Don't forget to admire the architectural part of the mining site that beautifully stands out against the green landscape.

A story from the past that makes you think about the future. That Flanders was once poorer than Wallonia, for example, and that the roles have been reversed. Losing a family member, losing a job as a result of a disaster. A calamity that is explained in a historical context, but could happen right here, right now. 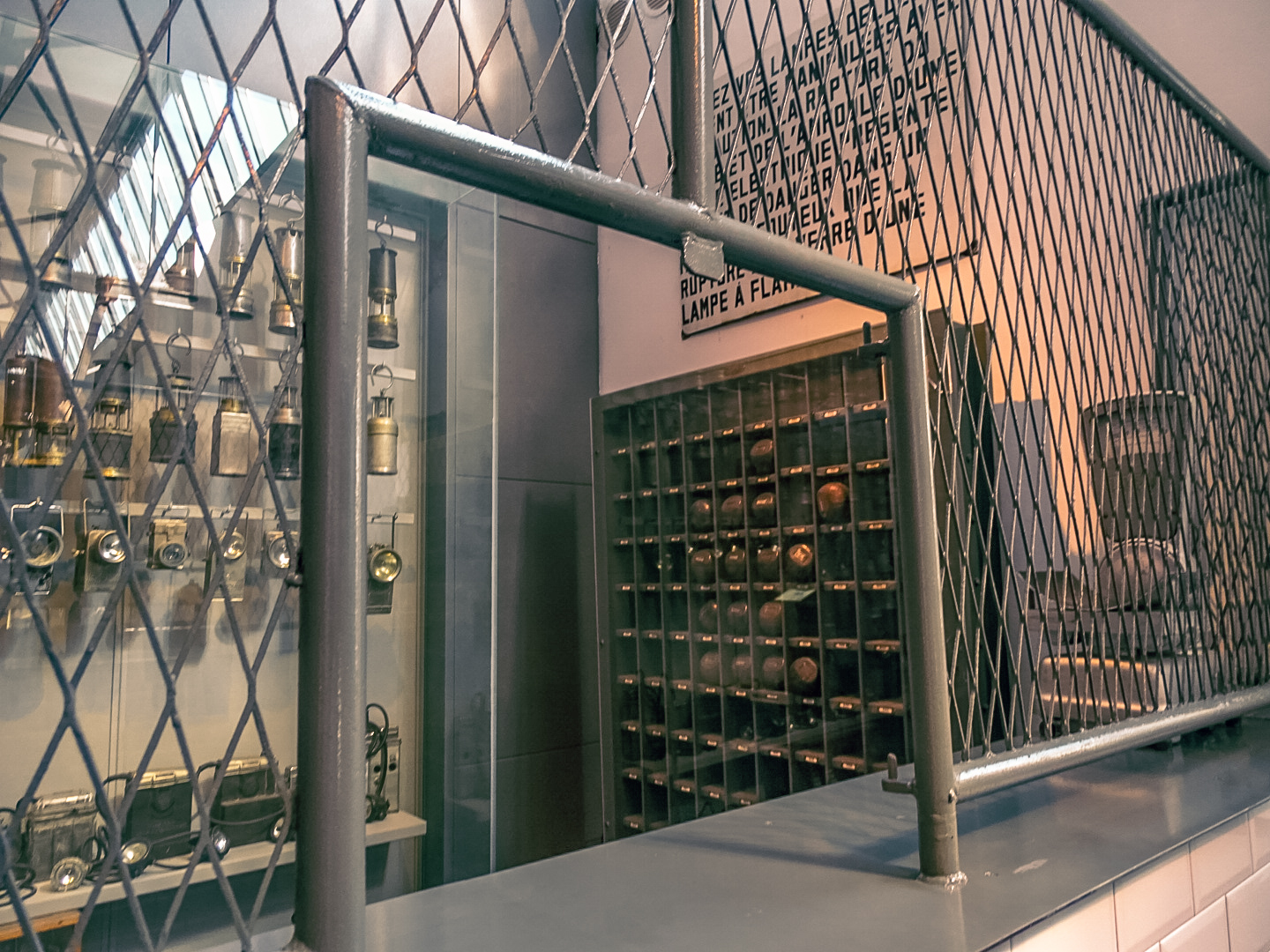 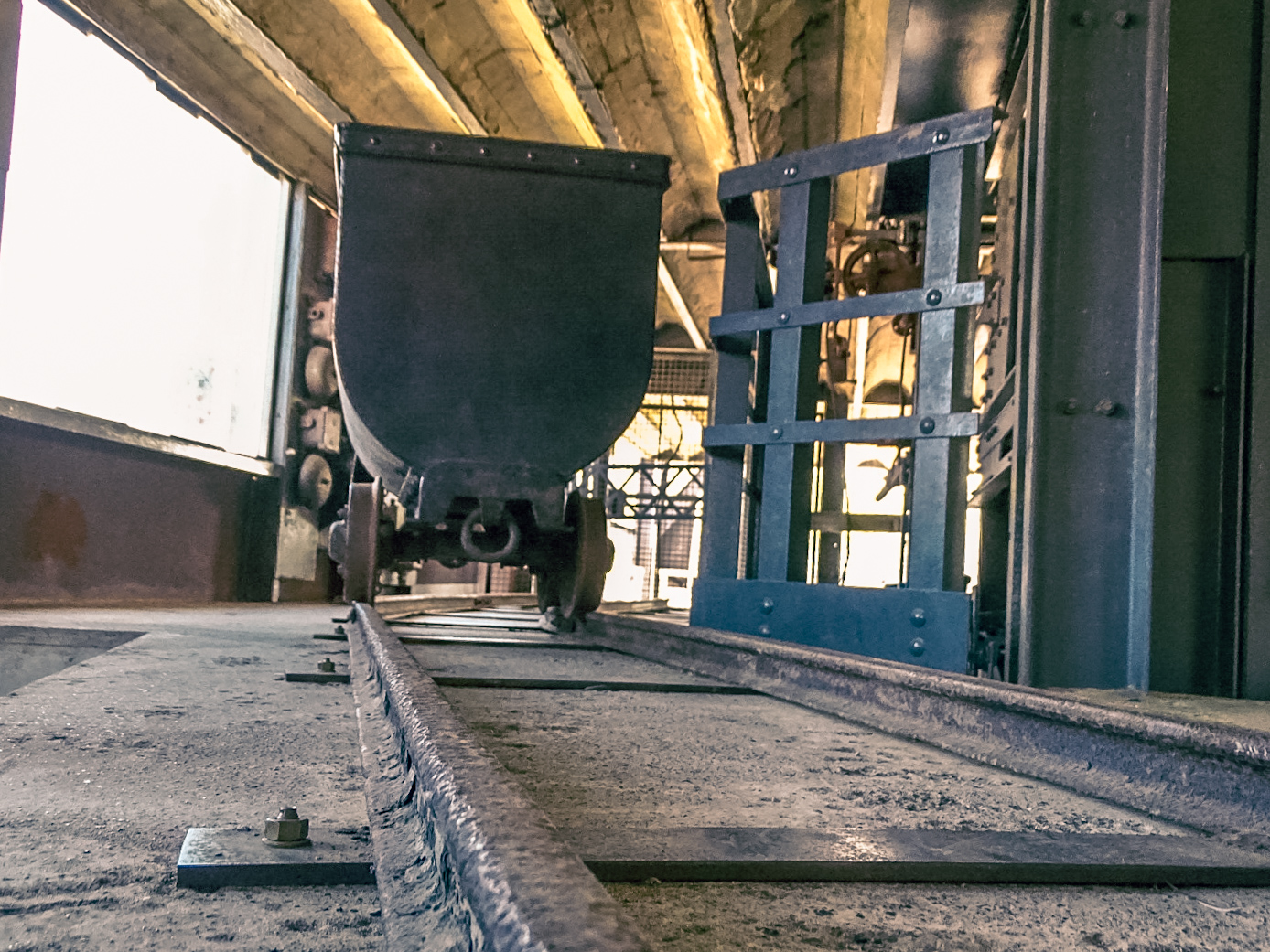 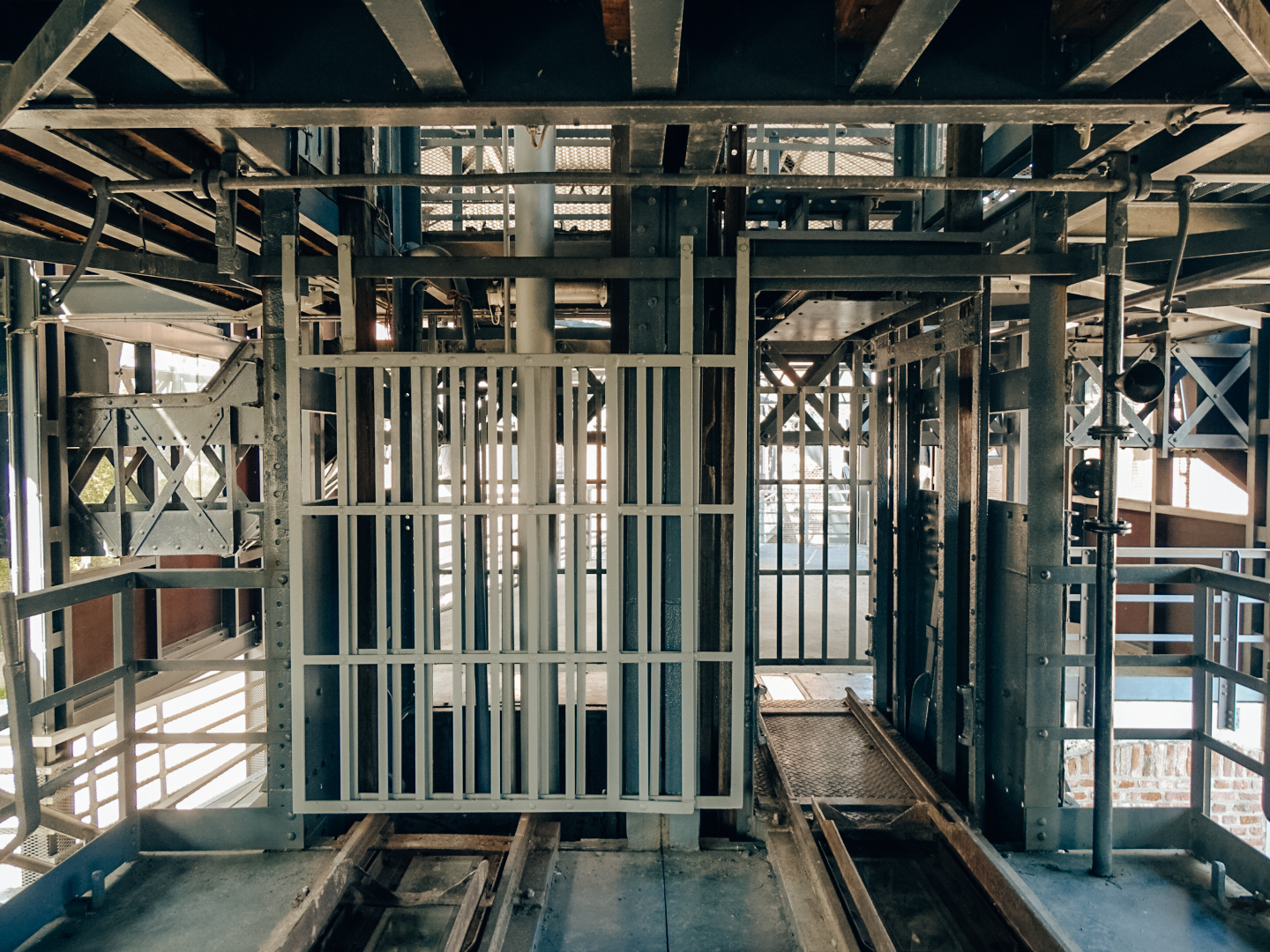 Whether Charleroi, or the whole of Wallonia, can ever regain the same status of wealth again, that, I don't know. But if 'richness' also has to do with beautiful rolling landscapes, colorful street art, amazing heritage sites and great food and drinks, then I definitely felt like a million bucks! Like a Queen in my own country...

For more information in general:

Auberge de L'Abbaye is a bed and breakfast with its own restaurant, only a few hundred meters away from the Abbey of Aulne and only 15 kilometers from Charleroi. An authentic building with a modern interior. Start your day with a delicious fresh breakfast trying local specialties such as ham, sausage and jam.

Novotel Charleroi Center is located in the city center, connected to the Rive Gauche shopping mall. Charleroi Sud Train Station is just across the river La Sambre, a 5-minute walk away. Enjoy the modern, comfortable hotel rooms and have a cocktail in the cozy bar in the evening. Or for fans: a game of table football!